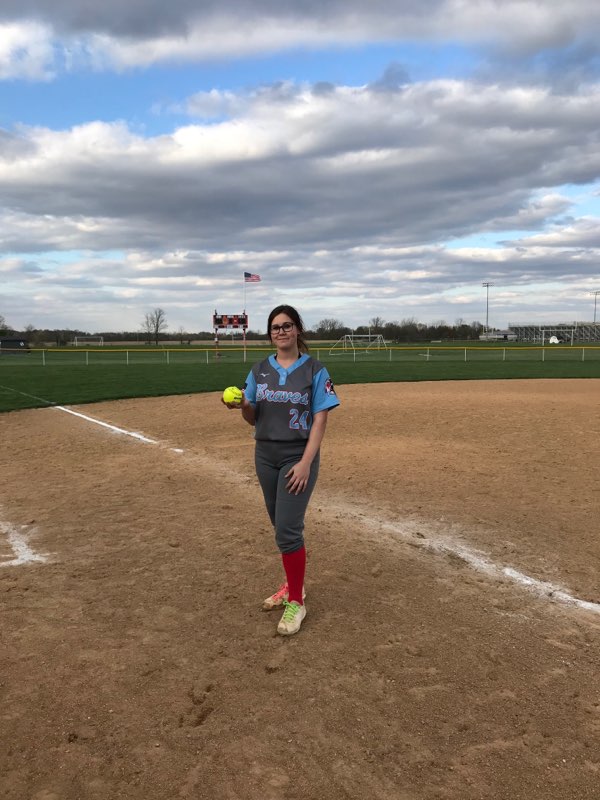 The Maconaquah Lady Braves picked you their first win of the season by defeating Northfield in action Wednesday evening.

1st inning:
Sophomore pitcher Phantazia DeBoard and Freshman catcher Jada Freeman went to work early as DeBoard struck out the side on 11 pitches.

The Lady Braves’ offense started with the first three batters drawing walks, loading the bases for Freeman. Freeman stayed locked and pulled a 3-1 pitch to the left field fence for a base clearing double. Freshman Laylah Swift took her first pitch off the back foot, sending her to 1st. Freshman Madi Wibel went 3-1 before drawing a walk, again loading the bases in Maconaquah’s favor.

Junior Kayla Smith hit a grounder to Northfield’s second baseman who turned two on the play, but Smith earned an RBI as Freeman scored. Sophomore Lexi Musgrave started a two out rally with a hard ground ball to the left fielder, scoring Laylah Swift. Musgrave advances on the next couple pitches to be in scoring position for Freshman Sydney Barnes. Barnes singled, scoring Musgrave.

Clifton returns to bat, drawing a walk. DeBoard is hit by the 3rd pitch offered to her, loading the bags for Dani Gross. Gross sends a hard hit ground ball to right field, scoring Barnes and Clifton. With two on, Freeman takes a 4-0 walk. A strikeout ended the Lady Braves’ 1st inning offensive marathon and giving them an early 8-0 lead.

2nd inning:
Phantazia DeBoard takes the lead off batter to a full count before allowing a walk. Northfield’s first baserunner of the evening stole on the next pitch. A fly out to second baseman, Barnes, resulted in the first out. DeBoard gets a 4 pitch strike out for the 2nd out. Northfield advances to third on a 3-0 passed ball, but DeBoard and Freeman shut down the threat with a strikeout swinging.

Maconaquah took no time finding themselves back on the bases starting with Madi Wibel taking a count 3-1 before being walked. Kayla Smith took a first pitch strike, then a next pitch passed ball sends Wibel to 2nd. Wibel found some wheels and stole 3rd base on ball 3. Smith walked. Lexi Musgrave floats one just beyond Northfield’s second baseman, advancing Smith to 2nd, Wibel holds up and remains at 3rd. Barnes takes the first pitch to the hand, scoring Wibel. Clifton takes her third walk of the game, scoring Smith.

With the bases juiced, pitcher Phantazia DeBoard stepped into the batter’s box. DeBoard hit a grounder to the third baseman, scoring Musgrave. With bases loaded and a 12-0 lead in the bottom of the 2nd inning, DeBoard leaves the base early, becoming the 1st out of the frame. Dani Gross singles on a fly ball to center field, scoring Sydney Barnes, Clifton gets held up at 3rd. Jada Freeman takes four consecutive balls, taking another walk and loading the bases for the Lady Braves. Laylah Swift hits a hard grounder to the second baseman, resulting in a double play to end the inning.

3rd inning:
Northfield’s lead off batter connects to put the ball in play, but an error by Maconaquah’s third baseman puts a runner on 1st. DeBoard gets a 3 pitch strikeout for the 1st out of the inning. The next batter took a strike, then the runner on first was called for leaving the base early, giving Northfield their 2nd out. DeBoard walked the batter, putting Northfield on first base again. Northfield looked to be aggressive stealing on the first pitch to the 4th batter of the inning. The runner advanced on a passed ball, putting her 60 feet from Northfield’s first run of the night. DeBoard battled hard and picked up her 7th strikeout for the 3rd out.

Maconaquah’s offense starts off with a strikeout. Kayla Smith gets a single, followed by a Lexi Musgrave line drive to center, advancing Smith to 2nd. Sydney Barnes is hit by the first pitch, loading the bases for Clifton’s 4th walk of the game, scoring Smith. DeBoard grounds out for the first out, but collects an RBI with Musgrave scoring. Dani Gross gets to a full count before being walked and reloading the bases. Jada Freeman gets down in the count going 1-2, but eventually gets walked, scoring Barnes. Laylah Swift reaches on a walk, Clifton becomes the 16th Maconaquah runner to safely step on home. With bases still loaded, Dani Gross leaves the bag early for the third out of inning.

4th inning:
DeBoard walks the lead off batter. The runner advanced to second and then on to third from the same passed ball. DeBoard collects her 8th strikeout with a strikeout looking. DeBoard goes to a full count before giving up her 2nd walk of the inning, putting runners at 1st and 3rd with only 1 out. DeBoard and Freeman went to work, recording 2 more strikeouts on 6 pitches ending Northfield’s biggest offensive threat of the game.

The Lady Braves went into the bottom of the 4th frame with a 16-0 lead and another pitching change from Northfield.

Madi Wibel roped a line drive to the left field fence, but is held up at first base. Wibel steps off first for the 1st out. Kayla Smith follows suit, singling on a line drive to left field, giving her another single. Kayla Smith is also called out for stepping off the base. With two outs, Lexi Musgrave grounded out to the pitcher for the 3rd out.

5th inning:
Maconaquah’s defense takes the field with a 16-0 lead, needing just 3 outs for their first win of the season, but to no avail, Northfield put up a fight.

Northfield’s lead off batter flies out to short stop, Lexi Musgrave for the 1st out. DeBoard gets way ahead on an 0-2 count, but a foul ball to the knee removes catcher Jada Freeman from the game. Shortstop Lexi Musgrave stepped up by replacing Freeman, catching for the first time this season. DeBoard was unable to get that 3rd strike called, surrendering a walk. Northfield’s runner advanced on a passed ball and ended up on 3rd after another passed ball. DeBoard gets the next batter to strikeout, Musgrave tagged her out on the drop third strike, but Northfield was able to sneak into home for their first and only run of the night on that same play. With a shutout gone, unbeknownst to DeBoard, she had a no-no going with 2 outs in the final frame of the game. Unfortunately, that’s exactly when Northfield’s first hit of the game occurred. Northfield advances to 3rd on the same passed ball, putting another runner in scoring position. DeBoard gets the batter to ground out to Sydney Barnes for the final out of the game.

The Maconaquah Lady Braves got their first win of the season.