We had two champions today, several PRs, guys finishing with better or at placings they came in predicted at, and finished in 6th place out of 10 teams. All in all it was a good day and proud of the guys competing and those that came to cheer their teammates on, help them at the meet, and were looking to learn from those in the meet with the aspiration of being in it next year. Things are coming together nicely for our team and we are looking for the next few individuals to step up in some events.

Our two champions of the meet were Nolan Kelly with a PR in the 400m and Braiden Walton in pole vault. All of our relay teams placed with the 4×4, Chance Hagan, Sam Bourne, Corbin Middlekauff, and Kelly, taking second with a PR. The 4×8 improved by 14 seconds and took 5th with Hagan, Bourne, Kaden Law, and Hayden Maiben. Our 4×1 took 7th composed of Kelly, Greg Friend, Matt Ingram, and Walton. Adam Bowman was awarded two placings in the meet, 2nd in the shot put and seventh in the discus. Others taking places in the meet were Middlekauff in the high jump, 6th,  and long jump, 7th. Bryce Ward came up placing 8th in the high jump as well. Bryant Teegardin PRd and earned an 8th place finish we weren’t expecting. Hagan went 5th in the 800 while Bourne PRd and took 4th in the 1600. Sam also PRd in splits in the 4×8 and 4×4. Kelly finished 7th in the 200 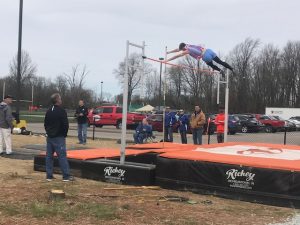